Bosque Eterno de los Niños, is Costa Rica’s largest private reserve, and it is home to an astounding level of biodiversity due to its position straddling the continental divide.

This past weekend I had the opportunity to do a little hiking off the beaten path in the beautiful cloud forest of Costa Rica. Along with two friends who live in San Luis de Monteverde, I hiked to the San Gerardo Field Station in the Children’s Eternal Rainforest, so named because it is protected in part due to the fundraising efforts of elementary school children in Sweden. 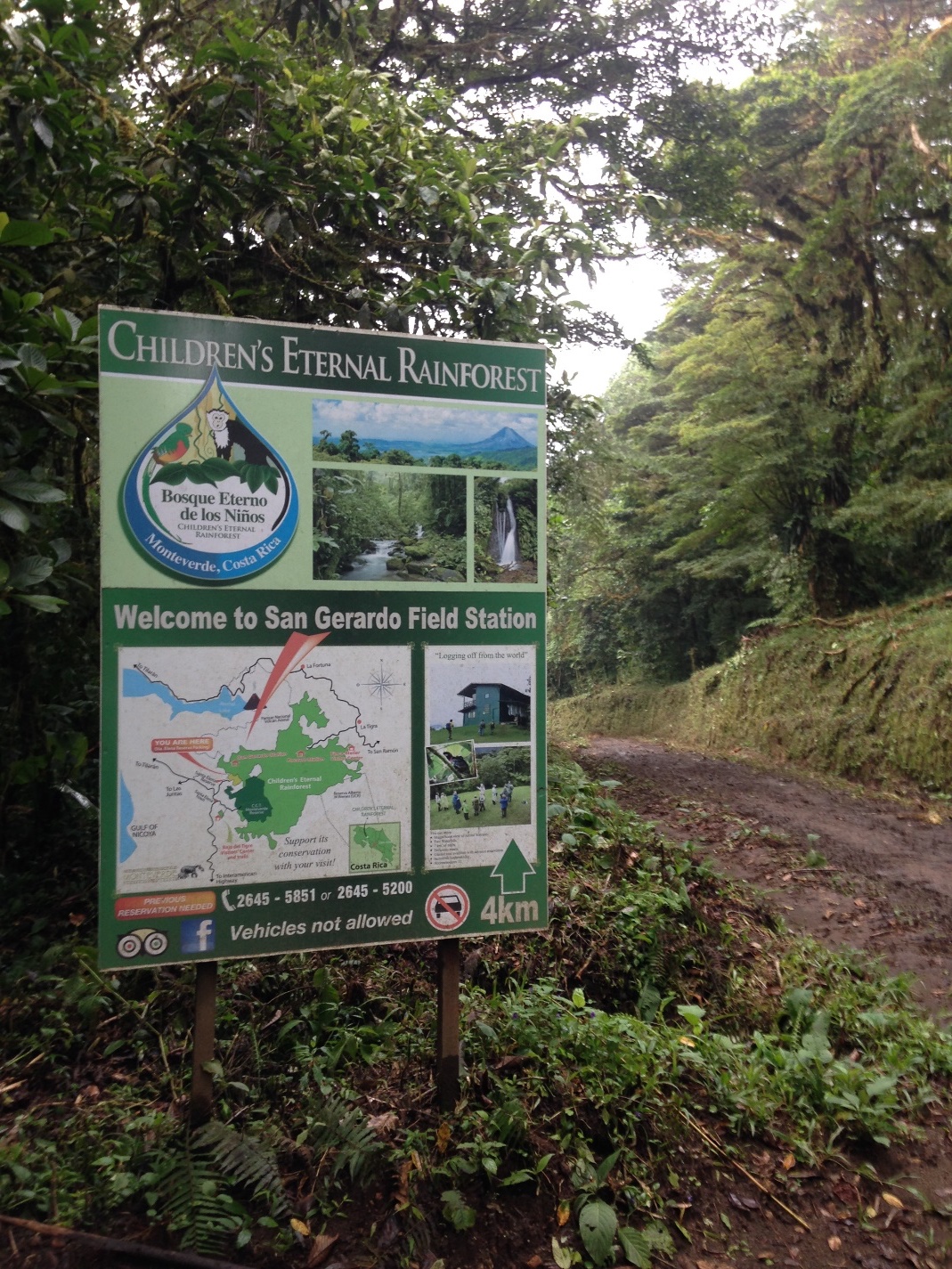 Trailhead for the San Gerardo Field Station in the Santa Elena Reserve.

The Children’s Eternal Rainforest, or Bosque Eterno de los Niños, is Costa Rica’s largest private reserve, and it is home to an astounding level of biodiversity due to its position straddling the continental divide. The continental divide separates watersheds that feed into either the Pacific or Caribbean coast of Costa Rica, and as a result the Children’s Eternal Rainforest is home to a large variety of habitats and species unique to each side of the divide.

We made reservations for our hike a few days earlier at the Children’s Eternal Rainforest office in Santa Elena. The Field Station can prepare meals for individuals and groups if you give them enough notice, and the appeal of not having to pack in our own lunch was hard to resist. We set out early on Sunday morning and made our way to the Santa Elena Reserve, where the trailhead for San Gerardo is found. I only saw the parking lot of the Santa Elena Reserve, but the forest there had a very primordial feel, to the point that I expected to see little dinosaurs running through the trees. After lacing up our boots and making sure we had enough water we set out on the 3.5 km trail to San Gerardo. The first 2km or so are on a “road” but this road was so muddy I can’t believe anything besides an ATV would be able to ride down it. The heavy mud was fun to walk through, but I was feeling pretty happy I had decided to wear my hiking boots instead of my sneakers! 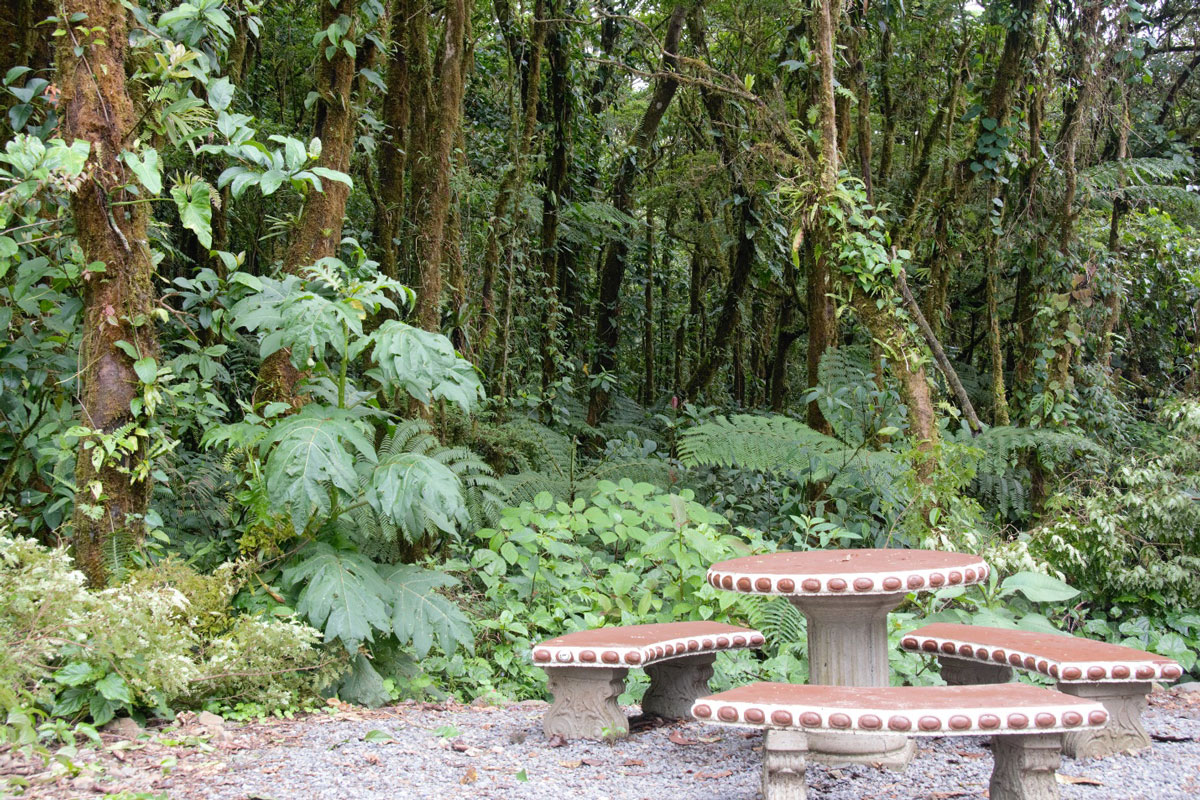 Since we wanted to go to San Gerardo Field Station we needed to enter through the Santa Elena Cloud Forest Reserve entrance. We just talked to the security guy and he let us in. Once inside Santa Elena Reserve we found the entrance to Bosque Eterno. Bosque Eterno de los Niños is huge so there are many entrances depending on where you want to go.

When we first started out, the sky was a little grey but after we walked for about 15 minutes the sky cleared up and the sun even came out. We were feeling pretty lucky because the entire previous week had been grey and rainy in the Monteverde area. The path to the field station is downhill, which was great in the moment but also an ominous foreshadowing for what we would have to go through on the way back to the Santa Elena Reserve. As we neared the point where the trail stops being a “road” and becomes more narrow and trail-like, we were treated to an amazing view of the Arenal volcano and lake. Both seemed so close to us as the crow flies, yet it would take nearly 4 hours to arrive there in a car or bus. 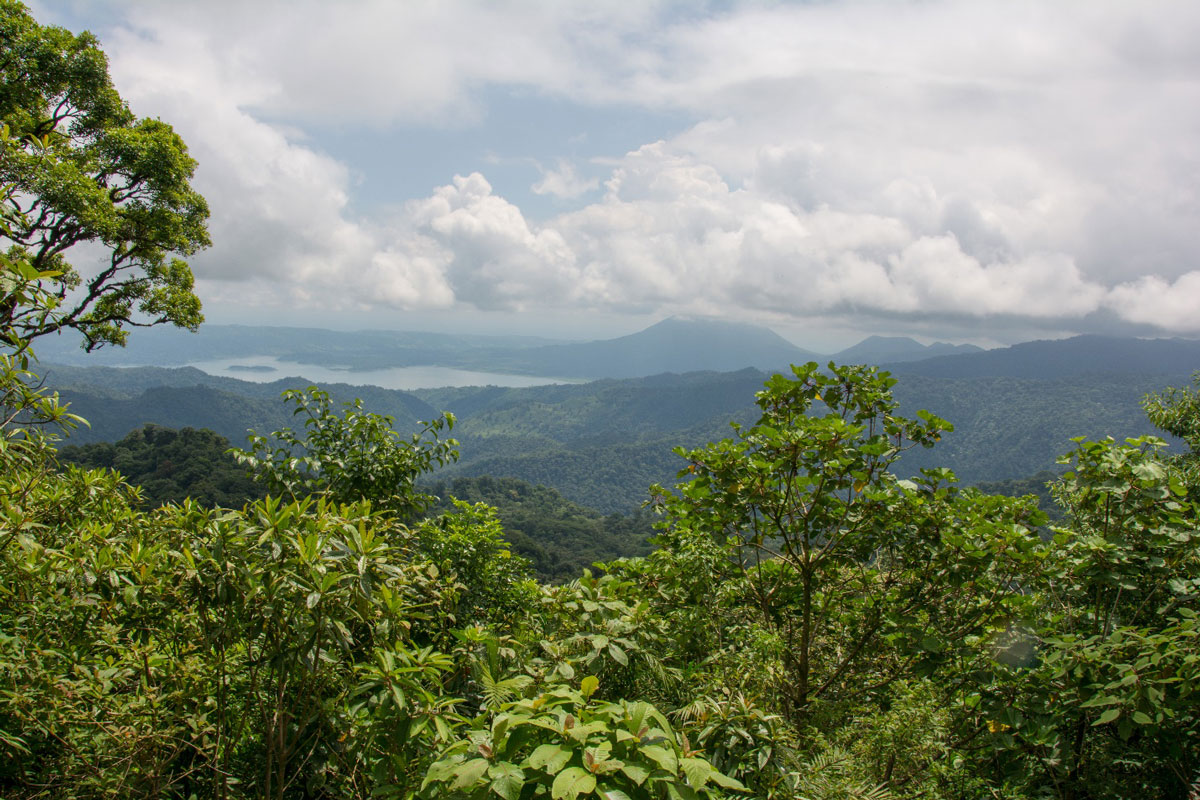 Views of Arenal Volcano and Lake from the trail. Still can’t believe our luck over being able to see this view after so many days of cloudy skies!

The part of the trek on the actual trail was magical and we kept hearing the unique sound of the Three Wattled Bellbird, though we didn’t actually see any bellbirds with our eyes. We eventually made it to the Field Station itself with about 30 minutes before lunch time so we decided to hang out before exploring the 10 km of trails around the station. The Field Station has accommodations for up to 32 people, so if you wanted you could choose to spend the night there. We elected to just do a day-hike though, since we were trekking with a 7-month-old baby as part of our crew. The Station has a gorgeous view of Arenal from its second story porch, which is outfitted with hammocks for lounging. While hanging out on the porch, we met Geovanny who works and lives at the Station as its caretaker. It was interesting to learn that Geovanny’s family actually used to own the land that the Station is located on, so he knew a lot of intimate details about the area. It was crazy to think about how difficult it must have been to arrive there before there were paths carved out – apparently, most people trekked through with machetes and carved out their own way!

After chatting with Geovanny about the history of the Field Station, lunch was served! The meal was a traditional casado with rice, black beans, roasted chicken, and salad. It was the perfect fuel to replenish after the hike down, and to prepare for the hiking to come. I was already feeling very content with the meal, when the women in the kitchen brought out a heaping platter of fresh donuts. With a cup of Costa Rican coffee, a warm donut, and a beautiful view out the window of the dining area, I didn’t think life could really get any better! We gave ourselves some time to digest and scoured the trail maps to figure out what our next move would be. We decided to head out on the Sendero Catarata, or Waterfall Trail, a 3.2 km trail that wouldn’t take us too far away from the path back out to our car. 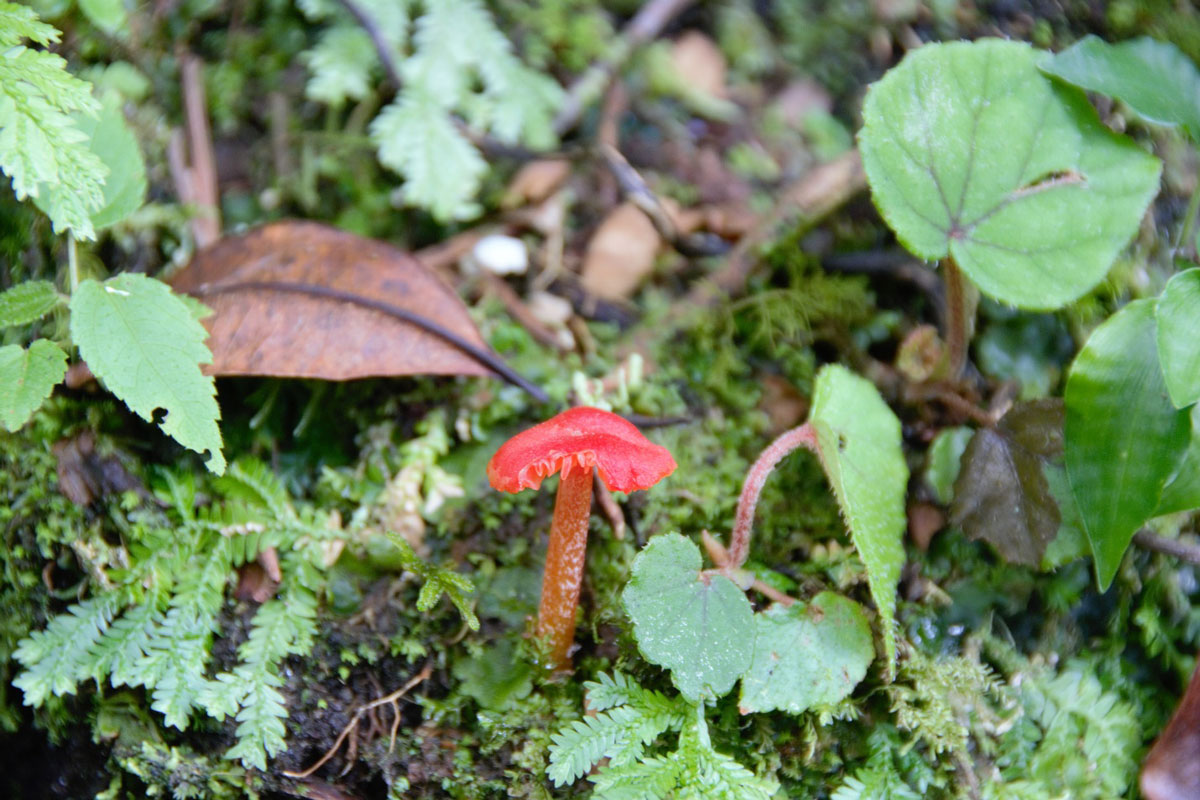 Little mushrooms on the trail to the waterfall.

We set out and very briefly had some rain, but luck was in our favor and as quickly as it started, the rain stopped. The trail was absolutely beautiful, and we saw some neat looking mushrooms along the way. The trees were enormous and based on their size seemed to be old growth, again lending a primordial air to the whole experience. After hiking through this forest wonderland for about half an hour, the sounds of water crashing preceded our emergence into a little clearing with a gorgeous waterfall. We spent a good amount of time admiring its beauty and reveling in our luck that it wasn’t raining, before we decided it was time for the uphill trek back to our car. Luckily the steepest part was right when the path switches from being trail to “road” and once we mucked (literally!) through that part it wasn’t too bad the rest of the way out. I was particularly pleased that despite the muddy conditions I didn’t take any spills!

The reward for taking the Sendero Catarata!

All in all, the hike down to San Gerardo Field Station is not to be missed! It doesn’t have nearly as much foot traffic as the other reserves in the area, like the Monteverde Cloud Forest Reserve, but it’s just as beautiful – maybe even more so! If you want to have even more time exploring the area, you can make a reservation to stay the night with all three meals included through the Monteverde Conservation League. More information on making reservations can be found here.

Tips: If possible, try to wear hiking boots! Wear clothes that you don’t mind getting muddy, and be sure to bring raingear just in case. There is water available both at the Santa Elena Reserve and down at the Field Station, so be sure to fill up and stay hydrated. If you’re day-hiking, make sure you save up some energy for the steep climb back up!